Rehashing The Past: The Story Of Hashish 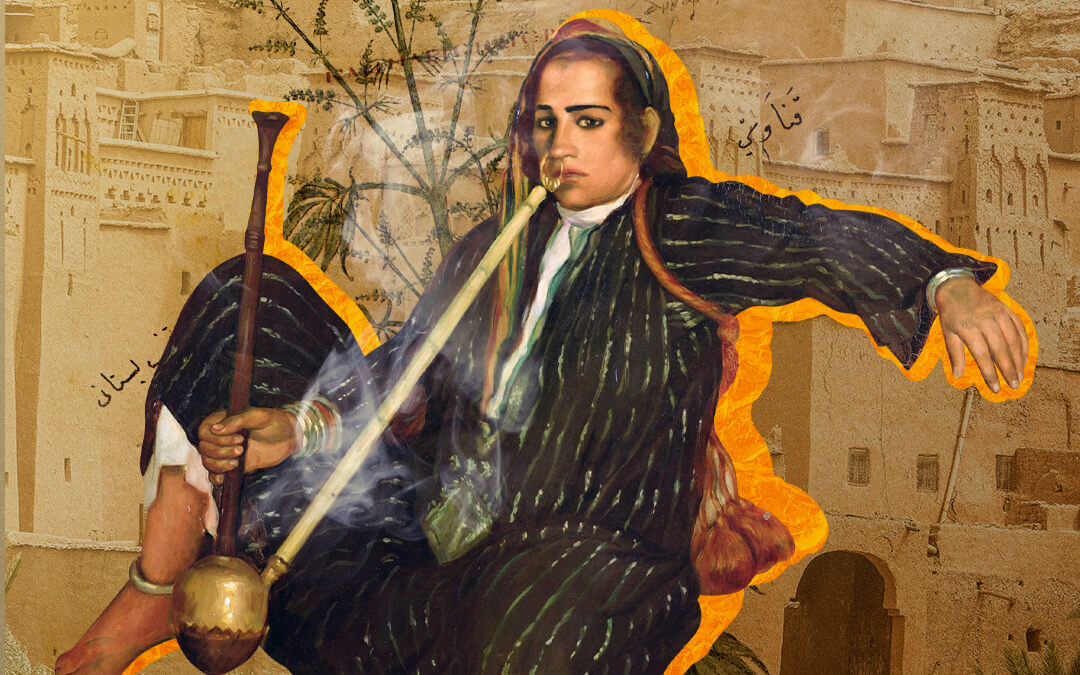 About 10 thousand years ago on the mountainous areas stretching between China and the Himalayas, various tribes were busy harvesting bountiful amounts of cannabis. They made textiles from it. They gathered its seeds for food. No one was interested in the sticky residue it produced.

Two key events happened to transform that crop from a utility into a mind-altering substance, and then into a global phenomenon.

The first men (and women) on the moon

The first event happened when cannabis resin got onto the skin of those ancient farmers. After handling cannabis for long enough, some of its oils inevitably got onto their hands, which ended up being sniffed or tasted. We’ll never know the precise moment in history when resin first connected with human senses, but minutes later, the cultivators found themselves lifting off on a smooth ride to the moon, becoming the Neil Armstrongs of newly found psychedelia. Perhaps Earth’s first hashtronauts were inspired to proclaim, “One small edible for a man, one giant high for Mankind!”, as they reached a new plane of consciousness.

Or maybe they just took a nap.

Whatever happened on that very first trip, the experience was an essential first chapter in the story of hashish. After all, if cannabis resin hadn’t made an impact on mankind in Asia, there would be no reason to further experiment with it and discover new methods of enjoying it.. There would be little reason to transport and trade it throughout the world, or to create the product that eventually became hash as we know it today. What was truly important was that people got high and decided they liked it. The rest is a tale of passion, science and profits.

How does this stuff work?

For the next few thousand years, those enlightened mountain farmers enjoyed their unrefined resin high, usually by eating it. Physicians throughout China noted its effects and began prescribing hashish for various medical conditions. Chinese herbalist, Emperor Shen Nung, recommended consuming cannabis as a remedy for rheumatism, malaria, gout, epilepsy, and more, in his texts from 2700 BC, which are still used today in Eastern medicine. In India, Hindu texts mention the smoking of hashish as part of religious services.

In its first roughly 6,000 years, hash of various forms became popular throughout Asia and India. It had become a staple of Eastern culture, but had yet to crawl far from where it was born. Over the next two millennia, hashish would find its legs and begin spanning the known world with the development of the Silk Road – the second key event in hash’s history.

Supply, demand… then even more demand

In the 2nd century BC, a trade route opened connecting China to the Roman Empire and Arabia. That route – the famous Silk Road – created an exchange of goods, inventions, and ideas criss-crossing between the Eastern and Western worlds. One of the best-selling ideas was authentic Asian hashish. Once Westerners got a taste, demand for hashish quickly exploded in Greece, Africa, and Egypt. Its intoxicating effect generated a massive surge in popularity that exploded throughout the world’s empires and kingdoms. Hash had gone global..

The early Romans took a liking to hash, spreading it across the Mediterranean regions and into Western Europe. Hashish became a part of everyday life wherever the Roman Empire ruled. Its heady smoke was used in steam baths and incense, its resins baked into desserts and served in foods, its medicinal qualities used to treat burns, tumours, and inflammation.

Hashish was a huge commercial success. But it took the Islamic world to give hashish its spiritual muse. Beginning in 600 AD, hash-inspired legends emerged from Persia and Arab countries, many of which were motivated by an anti-establishment sentiment that, centuries later, would help inspire the beatnik and hippie counter-culture movements.

Hashish was featured prominently in the Arabic collection of stories, One Thousand and One Nights, a series of folk tales gathered from centuries of Egyptian, Mesopotamian, Persian, and Indian writings.

Hash isn’t often associated with violence. A notable exception was the semi-factual Persian story from the 11th century AD about “The old man of the mountain”, Hasan ibn al-Sabbah. Ibn al-Sabbah was a self-proclaimed religious prophet who recruited men to consume large amounts of hashish and then murder his political opponents. He would invite men and women to live in his garden, ingest hashish (as well as wine and opium) and meditate. The men were then sent out in a state of drug-induced euphoria to murder people.

While some of this tale is considered myth, ibn al-Sabbah’s murderous plots were not. His violent followers did carry out the murders of some Arab sultans and leaders of the Crusades. The killings became associated with the assailant’s hashish habits, spawning the nickname “Hashishiyans” for the intoxicated young men who committed the acts. This nickname is thought to have became the root of the term, “Assassin”.

The widespread popularity of hashish in Persia and the Arab world is credited to the Sufis, an Islamic sect dedicated to fasting, prayer, isolation, and the denial of Earthly pleasures. A 12th century AD legend involves Haydar, a Sufi saint, who wandered out of his monastery one day to spend time in a nearby field. He found a plant dancing in the sun’s warmth and, after eating some of the raw leaves, experienced a curious uplifting sensation.

Haydar’s revelation was told and retold by the Sufis as they traveled throughout the Islamic world, presenting the story as a means to connect with God. The use of substances to expand consciousness has led the Sufis to be called the first hippies and Haydar an ancient Timothy Leary.

The last stop on the Hash World Tour was the Americas. The cannabis plant was already there, spun and smoked by the Natives long before the Europeans showed up. The early Americans found cannabis growing in their backyards, but were content to keep their relationship with it fairly platonic. They manufactured rope, clothes and paper, but remained mostly walled-off from impure thoughts of its recreational use.

It took until the 19th century for high-class hashish to join the American party – the party invitation coming from France. In the mid-1800s, a group was formed in Paris called the Club des hashischins whose mission, as the name might suggest, was to talk about and experiment with hashish. The club included many of France’s most influential writers like Charles Baudelaire, Gustave Flaubert, and Honoré de Balzac, who interacted with many writers and scholars from New York. That international fraternity provided hash the ticket to cross the ocean and bridge the philosophical gap between the old and new world.

The US responded to its new import with two equal and opposite reactions: “We like this”, and, “We prohibit this”. By the early 20th century, hash and its narcotic siblings found themselves in the same judicial penalty-box. In 1906 cannabis products were legally deemed poison. In the 1920s they were banned. It took nearly one hundred years of prohibitions, but in contemporary times cannabis products once again are seeing approval for medicinal use, and even more recently becoming legalized for recreational use in certain states.

Canada was a leader in decriminalizing medical cannabis almost 20 years ago and became one of the first countries to officially legalize it in 2018.

Ironically, while the Western world has become more welcoming to cannabis products, some of the earliest and best hashish producers in the East have gone in the opposite direction. China and Afghanistan, birthplaces of some of the planet’s purest hash, now treat cannabis possession as a criminal offence.

For now at least, the West is the place to freely enjoy the culture, the accessories, and the highs of hash. You can find cannabis-infused foods, drinks, and bath products in stores. The internet features countless DIY videos and online communities for hash-fans. But let’s take pause and remember, hash’s Western flirtation is just its latest fling on the way to the next artistic, spiritual, medicinal muse. Hash has been seducing us for millennia. No reason to believe the seduction stops in the West.

From Farmers to Emperors, cult leaders to French literary giants, all the way up to modern-day hippies and today’s enthusiasts, hashish has inspired a wildly diverse membership in its 10-thousand-year-old circle. Its early history reads like a psychologist’s notebook, with tales of mystical epiphanies, wanton hedonism, even murderous impulses – a catalogue of the Freudian id when loosened with a little ganja.

Looking back at those early cultures, it’s easy to imagine living a daily regimen that revolves around chewing, burning, smoking, or bathing in hash. Sounds like a nice way to spend your day. While we’re grateful to the early explorers who discovered the power of cannabis resin, separated it, shared it, and lived it, we’re happy to enjoy our favourite substance in 21st-century comfort and style.